This year’s New Music Dublin festival will take place from Thursday 27 February to Sunday 1 March and features twenty concerts with a range of Irish and international premieres. Most events take place in the National Concert Hall but there are also performances at the Royal Hibernian Academy, National Gallery of Ireland and Pepper Cannister church.

The festival opens with a performance of Morton Feldman’s 70-minute work for violin and piano, For John Cage, performed by Darragh Morgan and John Tilbury. The performance coincides with the launch of their recording of the work on the Diatribe record label.

There will be five concerts during New Music Dublin featuring artists from the jazz and contemporary music label. On Friday, flautist Lina Andonovska will perform a range of premieres to mark the release of her debut album. Saturday will feature works by Benjamin Dwyer performed by the guitarist, Maya Homburger and Barry Guy. On Saturday night, the label will host a triple bill of ReDiviDeR, Guillaume Orti and Stéphane Payen, and improvising trio BABs, and the final concert features pianist and composer Xenia Pestova Bennett and the Ligeti Quartet performing her Atomic Legacies, which will also be released by the label.

World premieres
There will be a number of world premieres during the festival. Úna Monaghan will present her Aonaracht I on Thursday at 9.30pm, a collection of six pieces for solo traditional musician and computer and featuring Paddy Glackin, Saileog Ní Cheannabháin, Tiarnán Ó Duinnchinn, Pauline Scanlon voice, Jack Talty, and sculpture by Nóirín Nic Alastair.

On Friday, ConTempo Quartet and guest artists will give the world premiere of Fergus Johnston’s Sinfonia for String Octet and Electronics, which uses pitch material generated from all 1023 cyphered names of the children who died between 1925 and 1960 in the Bon Secours Home in Tuam, Co. Galway, and the Bethany Home in Dublin.

On Friday night, Crash Ensemble will premiere a new song cycle by Icelandic composer Daniel Bjarnason, and on Saturday evening, the world premiere of Jane O’Leary’s Triptych for string quartet and orchestra will be given by the RTÉ National Symphony Orchestra and the Ligeti Quartet, conducted by Ryan McAdams. This concert will also feature Siobhán Cleary’s musical theatre piece Hum! and Icelandic composer Hugi Guðmundsson’s Box. Crash will also present ‘Free State’, the latest edition of the ensemble’s concert of work by up-and-coming Irish composers, on Sunday.

International artists and composer portrait
On Saturday at 3pm, Danish accordionist Andreas Borregaard will perform SELF-CARE by Jennifer Walshe and Simon Steen-Andersen’s Asthma. This will be followed at 5pm by soprano Juliet Fraser and Sonar Quartett performing the Irish premieres of Lunik1, plus Naomi Pinnock’s I am, I am and Heinz Holliger’s Increschantüm. Also on Saturday (2pm), there will be a Kevin O’Connell portrait concert with a cross-section of his chamber music played by Hard Rain SoloistEnsemble.

Bang on a Can All-Stars return to New Music Dublin following their performance at the festival in 2015 and will perform Irish premieres on Saturday night of Julia Wolfe’s Believing, David Lang’s sunray, Philip Glass’ Closing and Steve Martland’s Horses of Instruction. The group will also feature in the final concert on Sunday in a performance of Julia Wolfe’s new work Flower Power, which will receive its world premiere tomorrow (18 January) in Los Angeles by the LA Philharmonic. The work will be preceded in the New Music Dublin concert by Gerald Barry’s new Viola Concerto performed by Lawrence Power and the RTÉ Concert Orchestra.

Choral works
Chamber Choir Ireland will perform a programme of works called ‘I will sing away the despair of the old universe’ on Sunday at the Pepper Canister church. The concert will feature music by Canadian-Finnish composer Matthew Whittall, American-Finnish composer Alex Freeman and the Estonian composer Helena Tulve.

On Sunday afternoon, RTÉ Cór na nÓg and RTÉ Cór Linn will perform the world premiere of Seán Doherty’s We Must Create, a setting of a Stephen James Smith poem specially commissioned for the festival. They will be joined by ConTempo violist Andreea Banciu.

There will also be a showcase of works in progress for flutes and soprano by Laura Bowler, Deirdre McKay and Carmel Smickersgill; the return of the Totally Made Up Orchestra with composer Brian Irvine, this year featuring vocal group Tonnta; a lunchtime concert by students of the Royal Irish Academy of Music with a programme that includes Aílis Ní Ríain’s Under the Rose and a world premiere by Jonathan Nangle; yoga with music every morning at 9am; and NMDX presented by the Contemporary Music Centre, a delegate programme for national and international music presenters and broadcasters. There will also be a number of installations in the NCH over the course of the festival.

The next 20 years of new music
Finally, the Journal of Music is twenty years old this year and to mark the milestone editor Toner Quinn will host a discussion event on Saturday 29 February at 5.15pm–6.15pm in the Iveagh Room at the NCH. With composer and harper Úna Monaghan, music critic Adrian Smith, flautist Lina Andonovska, and composer and guitarist Benjamin Dwyer, the panel will tackle the theme ‘The Next 20 Years of New Music in Ireland: What Do We Need to Do?’

New Music Dublin, which is curated by Director John Harris, is an initiative of RTÉ, the National Concert Hall and the Arts Council. For further details, visit www.newmusicdublin.ie. For booking, visit www.nch.ie. 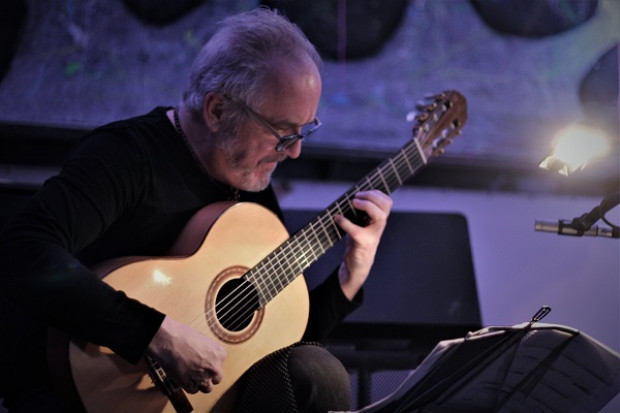 Little Islands of Melody and Silence
Mark Fitzgerald
Composer and guitarist Benjamin Dwyer's new album on Diatribe records, 'what is the word' – featuring Dwyer, Barry Guy, Maya Homburger and actor Conor Lovett – is the result of a renewed engagement with all of Samuel Beckett's output. Mark Fitzgerald reviews.