As part of National Harp Day, this Saturday 19 October, a new website will be launched showcasing the music of Edward Bunting’s first collection of music, published in 1797. The site provides recordings of all the tunes, in Bunting’s arrangements, plus downloads of the sheet music.

The sixty-six pieces, including tunes such as ‘Open the Door Softly’, ‘Planxty Reilly’ and ‘An Irish Lullaby’, were transcribed, performed and recorded by Cork harper and composer Dr Fiachra Ó Corragáin following Bunting’s exact notation.

The process of developing the Bunting Archive involved a number of phases: transcribing Bunting’s scores, practising and playing the music, recording each piece, and building a website on which to house the outputs. It was a wonderful way to dive deeply into Bunting’s collected music and I became intimately familiar with Bunting’s arrangement style.  His collections are precious links to the music of the great historical Irish harpers

The Bunting Archive will be availble at buntingarchive.ie.

National Harp Day 2019
National Harp Day is an all-Ireland musical event celebrating the harp, with many events taking place in various towns and cities across the country and also in locations abroad such as Philadelphia in the US and Cognin in France.

In Galway, an-all day event is taking place at the Galway City Museum, with a harp-makers’ exhibition and a talk by Kathleen Loughnane on the music of Patrick O’Neill. At Naas Arts & Culture Centre, there will be an audio-visual installation in place that will showcase the early Irish harp, while at the National Library of Ireland, harper-singer duo Mary Louise and Teresa O’Donnell will present a talk about the history of the harp, its music and its use as a symbol in Ireland.

Concerts will also take place in Armagh, with the Armagh Pipers Club Harp Group playing a coffee morning performance; the Royal Irish Academy of Music will host a concert of its harp students; and the Killarney Harp Club will perform at the Killarney School of Music.

Internationally, Deirdre McCarthy will perform at a morning concert at Brick House Cafe in Brewerton, New York. In Philadelphia harpers from the city will gather in Voorhees for a day of music and celebration of the harp, and, in Cognin, France, harpers Tamsin Dearnley and Fearghal McCartan will be in concert.

There are a dozens of other events programmed for National Harp Day 2019, including concerts, recitals, workshops and talks taking place in areas such as Ashbourne, Portadown, Omagh, Dingle, Gorey, Blanchardstown and others. To find out more, visit www.harpireland.ie/events/ Podcast: From River of Sound to the TG4 Gradam Ceoil – 25 Years of Change in Irish Music: An Interview with Laoise Kelly
Harper Laoise Kelly is this year’s recipient of the TG4 Gradam Ceoil traditional musician of the year award. She speaks to the Journal of Music about her musical upbringing, why Ireland really is a musical nation, and what the award means to her. 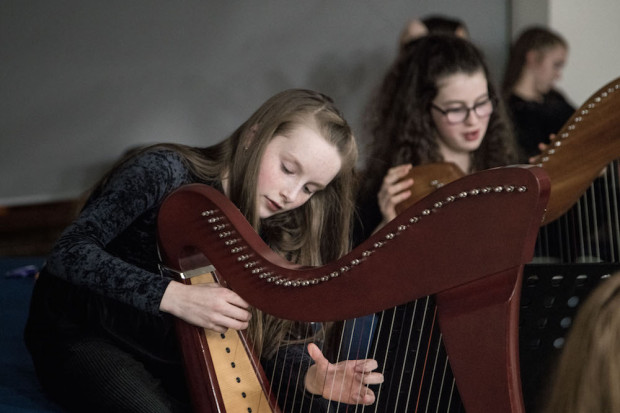 The Harp and Soul of Ireland
Toner Quinn
Irish harping has been given recognition by UNESCO. It is an important moment for Irish music, writes Toner Quinn.