The Huddersfield Contemporary Music Festival is gradually transforming our concept of the new music event, writes James Camien McGuiggan, addressing the disconnect from the rest of musical life – this year's 10-day festival showed we are beginning to see the rewards.

Contemporary classical music still has a reputation to fight: it still tends to be seen as academic, bourgeois, music for theoreticians rather than musicians. That is, it has made itself peripheral: it does not speak to, or for, the sort of citizens or music listeners we now are. This reputation is not entirely fair – there are works of universal import in this outward-looking tradition – but there is still a troubling disconnect.

The trouble is felt keenly by Graham McKenzie, the director of the annual Huddersfield Contemporary Music Festival, and I understand this year’s festival (hcmf//2018), which ran from the 16th to the 26th of November (I attended the final three days), as taking up the monumental challenge of broaching this disconnect – without, of course, compromising the tradition’s signal virtues of rigour and seriousness.

The challenge is taken up in subtle and bold ways. On the subtle end of the spectrum, McKenzie never invites a performer whom he has not seen perform, and who is not mindful of their audience. Presumably this is why even the most academic works were performed with an inviting warmth and musicality. Swedish group Mimitabu, Explore Ensemble and EXAUDI’s performance of Salvatore Sciarrino’s Carnaval, and the Ligeti Quartet stand out in this regard.

On the bolder end of the spectrum, there was ‘Canopy of Voices’, a concert for four Yorkshire choirs and chamber ensemble, including one local choir of refugees, of two works composed by Supriya Nagarajan, James Cave and Duncan Chapman, that was held in a local church and which was explicitly about bringing together Indian and Western classical music, and world cultures more generally. You can’t be more direct in including new audiences than putting them on the stage.

Canopy of Voices (a collaborative work led by James Cave) and Pleiades ne Maia (by Supriya Nagarajan), the main works of this concert (and both world premieres), were noteworthy for musical as well as political reasons, and not just through the force of heart given to them by the performers and composers, but because of their fine melodic writing (that of the harp in Pleiades ne Maia was particularly intelligent) and their control of acoustic space: the four choirs were spread around the church, and this was used to create effective drones, phasing and polytonality.

Classics and canon
hcmf// is not an exercise in political representation, of course: it is a contemporary music festival. Alongside the directorial wrenching of contemporary music out of its rut typified by the programming of ‘Canopy of Voices’, there was a strong representation of recent classics and reworked canonical works: the second weekend of the festival featured several concerts centred around Sciarrino and Stockhausen. Stockhausen, being no longer really contemporary, was more often re-interpreted than played straight, as with his Signale zur Invasion and Oktophonie, which were performed simultaneously and accompanied by a film by Klaas Verpoest projected on vast scale onto three walls. 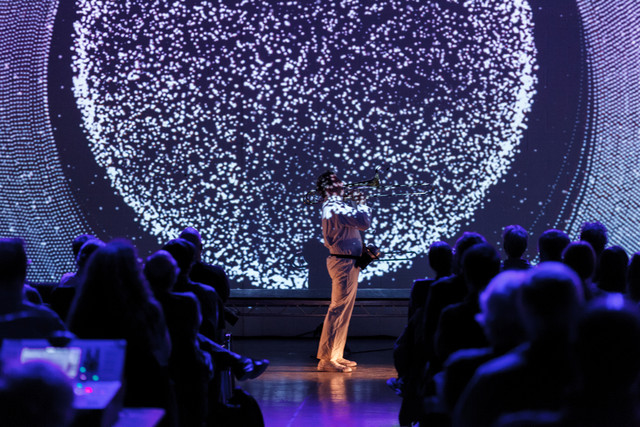 The festival also featured premieres of a more traditional complexion. Of these, Clara Iannotta’s ‘dead wasps in a jam-jar (iii)’, performed by the Arditti Quartet, was my favourite: her tentative atmospherics are becoming more organic, and the delicate electronics of this quartet – like distant shoals of glistening fish – were particularly arresting. Hanna Hartman’s THE BOILER ROOM, in which pops and clicks were bounced between the players over a texture that subtly and compellingly developed over the course of the piece, was also exceptional.

The wrap party, in a local craft brewery, featured Peyee Chen doing great justice to Jennifer Walshe’s Three Songs by Ukeoirn O’Connor (the only Irish representation I saw, although Walshe, Scott McLaughlin and Beckett were performed earlier, and the opening concert, Rebecca Saunders’ Yes, was inspired by Molly Bloom’s soliloquy), and some fine DJ work by Mariam Rezaei.

It is a shame, given how much great contemporary music there is, that so little of it ever gets recorded. It is some solace, though, that BBC Radio 3’s Hear and Now was constantly in the wings. One concert, the ‘hcmf// mixtape’ was broadcast live – it is available online, and I cannot recommend it highly enough – and subsequent programmes in December will broadcast selected complete works.

Addressing the disconnect
I said above that hcmf// is an attempt to broach the disconnect from the rest of musical life that contemporary classical music suffers. The test of this success, I think, is whether, hand on heart, I could say to a friend who has no particular interest in or knowledge of contemporary classical music, but who is serious about music in general, and who wants to be pushed and challenged, that they should seriously consider attending hcmf//2019. The short answer is yes. The festival was a marvellous success.

I confess to some hesitation in giving this answer, but I think that I am being unfair to the festival here, for two reasons.

First, the focus, during my visit, on Sciarrino and Stockhausen, two senior and conventional composers, is uncharacteristic of the festival. Earlier, there was a day in which every concert was free, and there was a host of less familiar composers whose musical material and touchstones were also more diverse: Kluster5’s pop and jazz influences, Marlin Bång’s Kudzu about climate change, or Hilda Paredes’ monodrama Harriet about Harriet Tubman, to mention only a few examples from the hundred-page-thick programme.

Second, McKenzie freely admits that the festival is not yet where it should be. A number of projects are in the works that will reap fruits for future festivals. Particularly exciting is the community investment scheme, just getting underway, where the festival will work with arts organisers in the larger Huddersfield area to share what it has learnt, and then (hopefully) bring these artists to the festival. McKenzie, who has a keen political awareness, stressed that the scheme is looking for young people who are interested in issues of cultural diversity, gender balance, disability and socio-economics. This is a noble aim, but I for one would hope that community artists would also fill the one musical lacuna I sensed in the festival: at the wrap party, people danced in the numbers and with the skill of academics, not world-class musicians.

The Huddersfield festival is one of the main events in the contemporary classical music calendar. Thanks to exquisite curation and consistently splendid performances, it has lived up to its reputation this year. If it maintains its standards of programming and performance while further broadening its audience in coming years, then it could find itself an important event in any serious music fan’s calendar. 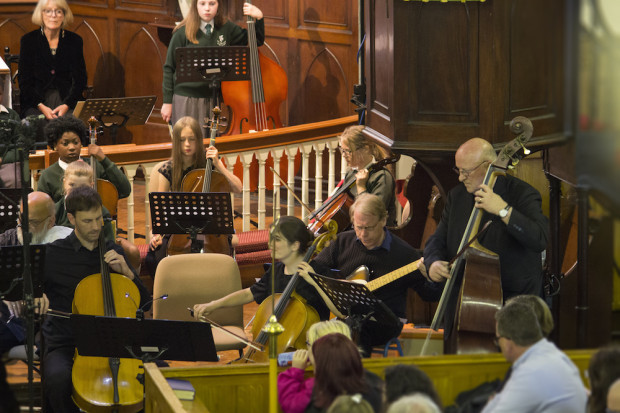 Together Never Fails
Brendan Finan
From Rebecca Saunders and Séverine Ballon to Gavin Bryars and Galina Grigorjeva, the music at The Book of Hours two-day festival in Louth knew no borders, writes Brendan Finan. Premieres by Pisaro, Grigorjeva, Tanaka and Sciarrino at 'The Book of Hours' in Louth
The festival will also mark the presentation of the Belmont Prize for Contemporary Music to Eamonn Quinn. 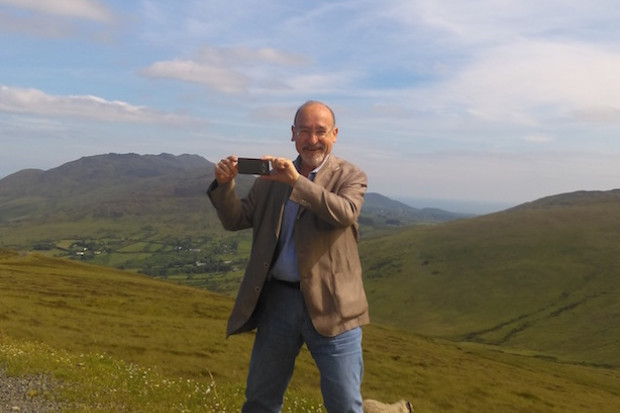