Who's Afraid of Electronic Music?

Negotiating the gloom to my seat among the pews, I could see onstage a curious prospect: an inflatable palm tree; inflatable dinosaurs (green stegosaurus, sapphire brontosaurus); a multicoloured scarf; and behind them a screen projecting a MacBook desktop with various windows open: YouTube screens and Google Books screens full of strange phrases (‘ASMR soft and delicate sounds violin brushing’) – the humdrum chaos, in other words, of everyday laptop life.

This was the Irish premiere of Jennifer Walshe’s The Total Mountain for voice, video and electronic tape. As it happened, the stage set-up was a gateway for a delirious trip through internet inferno that began when Walshe (Virgil to the spectator’s Dante) strode on in a pink dress and sparkly shoes and began a duet with a virtual version of herself projected onto the screen, her virtual self dancing around a back garden in a red t-shirt and jeans while her actual self stood still at a mic stand. Scenes and scenarios, funny and disturbing, flew by like cards from a deck: an advertisement for a fake album of IBM-inspired pop; a PowerPoint presentation on Oliver St John Gogarty; a reenactment of Bob Dylan’s famous video for ‘Subterranean Homesick Blues’ (Walshe’s cue cards scrawled with corporate jargon); a pantomime in a rural cottage with people wearing animal masks, accompanied by Walshe’s amplified susurrations (‘Wssschh… pchoo! pchoo!’). When the concert ended I walked out thinking: How can something be at once so far out yet at the same time totally relatable?

Who’s afraid of electronic music?
The premiere of The Total Mountain was part of Music Current, Dublin Sound Lab’s three-day (7–9 April) mini-festival focused on recent electroacoustic music. As well as concerts, Music Current featured composer workshops and masterclasses with Gráinne Mulvey, Ann Cleare and Walshe – younger composers having the opportunity to have compositions workshopped and performed – and a panel discussion at the Contemporary Music Centre, chaired by Evonne Ferguson, entitled ‘Who’s Afraid of Electronic Music?’ At the latter, as well as the panel – which included Bernard Clarke, Fergal Dowling and myself (donning my musicologist’s hat) – an audience featuring composers (Roger Doyle), international new music promoters (Lucy Railton), representatives from the Association of Irish Composers (Anna Murray), and Irish Times music critic Michael Dervan, engaged in lively debate, moving on from the provisional topic to cover a range of new music issues, such as audience building, venues, and cooperation between the various parties active in Ireland’s scene. Whilst not all new music groups were represented, it was useful to have had a platform for constructive debate.

Along with Siobhán Cleary’s New Sound Worlds, Dublin Sound Lab (directed by Michael Quinn and Fergal Dowling) has been prominent in flying the flag in Ireland over the past decade for European modernism. Composers for whom Dublin Sound Lab have facilitated Irish premieres include Gérard Grisey, Luca Francesconi, Karlheinz Essl and Jean-Claude Risset; Irish composers commissioned include Ann Cleare, Gráinne Mulvey and David Bremner; and a couple of years ago Dublin Sound Lab brought over the Austrian composer Peter Ablinger, one of the most interesting – if at times vexing – composers currently working in mainland Europe. In the face of waning interest by the Arts Council, and in lieu of any more generously funded festivals of such European music, Dublin Sound Lab is doing an important job for those in Ireland who remain passionate about music in the post-war avant-garde lineage and who rarely get the opportunity to hear such ‘difficult’ music performed.

‘Spoils’ and living within our means
Music Current’s first concert featured violinist Mira Benjamin, cellist Lucy Railton, and Adrian Corker on analogue electronics. John Lely’s Part Music for Violin, performed by Benjamin, is a dialogue between long, static, barely-there violin tones and quiet bursts of white noise over the speakers; over the course of fifteen or so minutes one’s ear attuned to its extreme minimality to such an extent that, when one audience member accidentally dropped a pen, it resounded like the clang of a hefty portcullis. Railton and Benjamin’s performance of Giacinto Scelsi’s Duo for Violin and Cello, though containing some beautiful moments, lacked the sense of an overall dynamic whole; while Railton and Corker’s collective improvisation was a little too inhibited. In the festival’s last concert, Benjamin and Railton performed pieces by Music Current’s apprentice composers, of which the most engaging were Anna Murray’s Switches and Amanda Feery’s Blessed Damned, while Ilse de Ziah performed Gráinne Mulvey’s Syzygy for cello and electronics, which featured the most flamboyant display of synthetic electronics of the weekend (operated via laptop by Fergal Dowling).

If a certain modesty arguably obtains in much recent Irish new music – an aesthetic counterpart, perhaps, to ‘living within our means’ – Dowling’s Spoils for Baroque chamber ensemble and electronics was unapologetically ambitious, flying completely in the face of that trend. Spoils’ premiere took up Music Current’s second concert and was performed by Aoife Ní Dhornáin (baroque violin), Marja Gaynor (baroque violin), Ilse de Ziah (baroque cello) and Michael Quinn (harpsichord), with Dowling working the MAX MSP-generated electronics. Over several movements, Spoils meditates on archaic tropes of burial and reincarnation and features a creepy spectral video image (by Mihai Cucu) of actress Olwen Fouéré manifesting at times behind the players.

In auditory effect the work is an incredibly dissonant shake-up to the senses. The introduction sees a woman’s voice, gurgling and coughing, broadcast over the speakers, gradually densifying to become a wall of indeterminate noise. This sets the tone for the entry of the chamber ensemble: mostly playing in the middle to high register, the strings generally create a frenetic polyphony, a brutally dissonant squall texturally offset by the harpsichord’s shorter percussive notes. All throughout, the ensemble’s playing is processed electronically, shadowed by an electronic counterpart: notes reappear through the speakers, at a delay or at a shifted pitch, creating a bizarre chorus of intensely dissonant harmonies. At one point an electronic interlude seems, appropriately, to be playing the gale-force winds of a tempest – mad King Lear’s cataracts and hurricanoes. The power of Spoils lies not only in its fierce dissonance but in its unrelentingness, the torrent barely letting up for forty-five minutes.

Post-Darmstadt music in Ireland
Over the past decade the climate has changed for new music in Ireland. Where in the early 2000s a large-scale new music festival could focus on Luciano Berio’s music and bring to Dublin the likes of Ictus Ensemble, Ensemble InterContemporain and Ensemble Musikfabrik, a festival of, say, Salvatore Sciarrino’s music in 2016, and visits by those very same ensembles, is all but inconceivable. For those who occasionally put on their Ligeti Atmosphères CD at home, few outlets exist in Ireland for hearing such post-Darmstadt music in concert. This coincides ironically with a time when, in Jennifer Walshe, Ireland has a composer who teaches at the Ferienkurse most summers (she was dubbed the ‘bad-girl of Darmstadt’ in the German media) and who is directly influencing the development of European modernist music (the most recent issue of the German journal Musiktexte features a section devoted to her concept of the New Discipline). This being so, and some dappled light now piercing the economic gloom, perhaps in 2017 Dublin Sound Lab will be given a chance to expand upon its first, successful edition of Music Current with an edition of expanded scope. 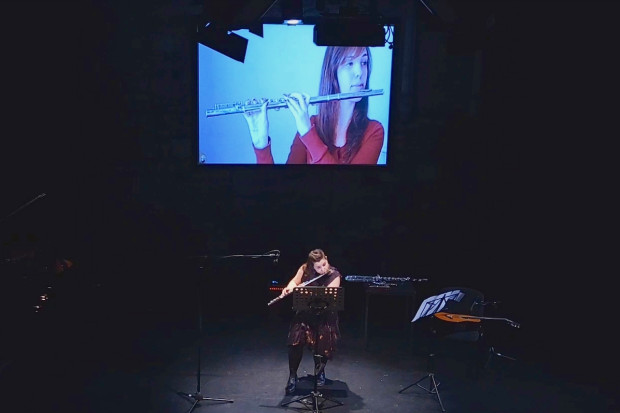 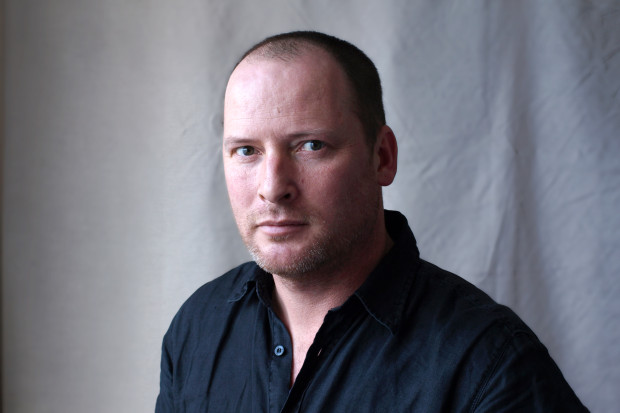 The Newest of the New: An Interview with Fergal Dowling of Music Current
Pursuing the latest in contemporary music sounds is key to the focus of Music Current festival, which begins next week in Dublin. Artistic Director Fergal Dowling spoke to the Journal of Music about the ethos of the event, current trends in music, and the ensembles performing this year.
Apr 4, 2019 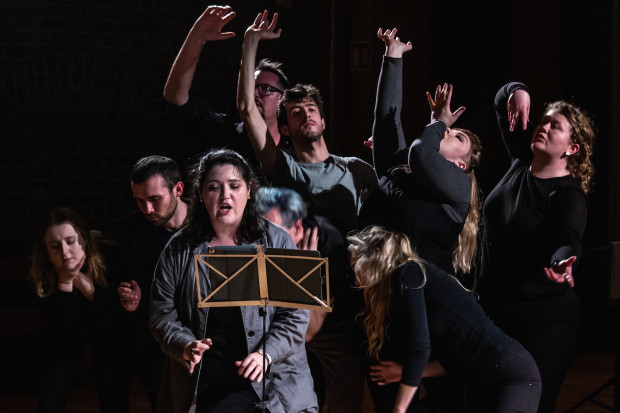 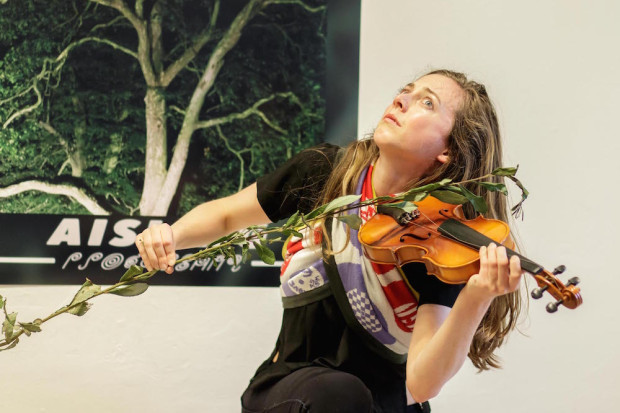 Everything Strange
Toner Quinn
In the world premiere of Jennifer Walshe's 'The Worlding' at the Model in Sligo, her 'Aisteach' project comes alive, writes Toner Quinn.
Sep 6, 2018