On Finghin Collins' latest release on Claves records, he is joined by Roseanne Philippens, Istvan Várdai and Máté Szücs for a performance of Mozart's two Piano Quartets. Brendan Finan reviews.

To the best of my knowledge, I hadn’t heard Mozart’s two piano quartets before sitting down to listen to the new album by pianist Finghin Collins, violinist Roseanne Philippens, violist Máté Szücs and cellist Istvan Várdai. There is something about Mozart, though; a stability or a security, or maybe, for the classically inclined, an intrinsic sense of familiarity, no matter how well you know the piece. Whatever it is, it allowed the opening notes of this album to land for me with a palpable ‘Of course.’

The quartets (No. 1 in G Minor, K478, and No. 2 in E-flat major, K493) were commissioned by Anton Hoffmeister in 1785, though he, on seeing the first, rescinded the commission as the works were too difficult for the amateur market. Mozart completed the second the following year, opting for a different publisher.

These years also saw five of Mozart’s most popular piano concertos (numbers 20–24), and so it should be no wonder that the quartets frequently border the concerto in sound, with the piano going on several virtuosic flights of fancy, and the strings providing contrasting detail and punctuation.

Duet relationship
That’s not to say that the string parts are uninteresting or mere accompaniment. Mozart’s concertos can feel more like duets between soloist and orchestra, and here the piano and string trio have a similar relationship. Witness, for instance, the end of the first movement of the first quartet: the strings taking the theme together while the piano provides a rapid accompaniment in broken chords, or the wealth of dialogue between strings and piano towards the end of the whole quartet.

The sound of the piano blended with a string ensemble is one I find irresistible. Playing together, the piano’s percussive attack lends force to the strings, while their long bows counterbalance the piano sound’s decay. Elsewhere, the strings speak with one voice or three, dancing together over a rushing piano passage or reinforcing it.

Throughout both quartets, Collins finds a sound that is crisp and never frantic, the faster passages played skilfully and comfortably, their execution tidy and reserved. As a group, the quartet’s sound leans slightly toward the Romantic, unafraid of full, rich articulation and subtle changes of tempo. I was surprised to learn that this is the first time the four have recorded together, though Collins and Philippens have worked together previously, as have Szücs and Várdai. Their playing sounds like long-term collaborators, unified and focussed, here pushing the tempo just slightly, there rising like an orchestra to the top of a crescendo.

Drama, conflict, relief
The first quartet is the darker of the two, its first movement built on a couple of striking motifs and emphasising drama and conflict between the main themes. The latter two movements balance the storminess of the first, the lyrical andante pointing the way towards the brighter relief of the third.

The more substantial second quartet begins with a lovely misdirection towards A flat before settling into its home key, while the closing allegretto is a wellspring of melody. The lengthy second movement, a larghetto in sonata form, allows the group ample opportunities for expressive and delicate playing, with some real moments of beauty when statements are passed from piano to trio and back.

Credit is also due to Johannes and Inès Kammann of the German production studio Nordklang for their work in the editing and engineering. The instrumental lines are wonderfully clean and distinct, with the string parts close enough to blend but with just enough aural space between them to hear them separately.

Reminder
The recording was made in May of last year, at St Peter’s Church in Drogheda, the same month as I reviewed a very different concert from the same venue, from Louth Contemporary Music Society, which I described as being, for me, the marker of the beginning of summer. At the end of that month, Vantastival took place just nearby at Beaulieu House. Currently, LCMS’ summer festival is cancelled; Music for Galway, the festival for which Collins serves as artistic director, is postponed until the end of June; and Vantastival has rescheduled for September. It’s a reminder of the variety and vibrancy of musical life in Ireland, and of the current havoc.

And yet. It’s to the arts that people have turned in this period of isolation, whether through live streams or recordings or TV, books, drawing, film. (As I write this, my neighbours are relaxing in their yard, blaring ‘Give It Away Now’ by the Red Hot Chilli Peppers.) The arts let us feel connected without physical connection. And for all that Covid-19 has left a hole in the arts scene, in Ireland and everywhere, the arts fill the same hole that it has left in our lives. 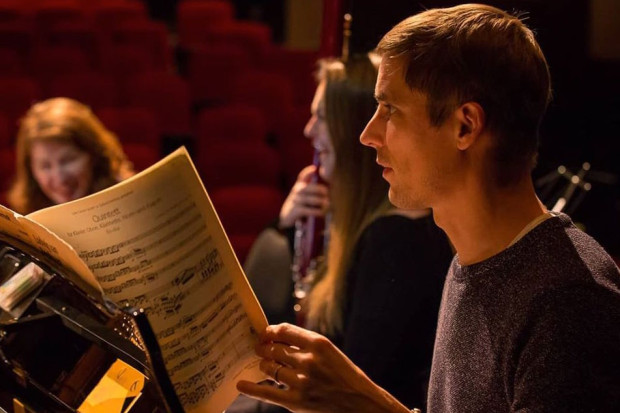 The Beethoven Connection
Toner Quinn
The Midwinter Festival in Galway focused on early Beethoven this year, and brought a renowned piano-violin partnership to the west. Toner Quinn reviews.